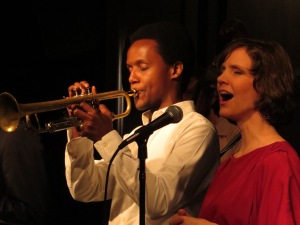 The pop vocalist Minnie Riperton died of cancer at the age of 31 in 1979 –  the year Jason Palmer was born. And though she was a striking phenomenon at the time — with a range of more than five octaves, and collaborators and champions like Michael Jackson and Stevie Wonder — her music, with its almost unfailingly sunny lyrics, is decidedly of that era. But, the pop music world being what it is, Palmer discovered her work as a teenager — a snippet of her song “Inside My Love” sampled on hip-hop group A Tribe Called Quest’s “Lyrics To Go.” Now Palmer has a new album (his fourth), Take a Little Trip, dedicated to the music of Riperton, the basis of a show at Scullers Jazz Club in Boston on August 28.

Palmer is a focused player, with a burnished tone that takes on a beautiful dark glow in his mid-range. What’s more, his solos, while punctuated with spontaneous leaps to the high end and explosive runs of fast notes, are shaped for narrative effect. Playing chord changes, he’s always aware of overall melodic shape. Every note, while not fussy, is delivered with clear intent.

The pop outlines of Riperton’s music are a natural fit for Palmer, providing rich melodic material. His arrangements take liberties — sometime extreme — with Riperton’s material. He reharmonizes the melodies and sets them to odd time signatures and mixed meters. There are some pleasantly abstract moments in the music — such as the trumpet-bass duo on the album’s “Adventures in Paradise” (which Riperton co-wrote with Joe Sample) or the dreamy rubato and exploratory guitar work by Greg Duncan on “Inside My Love.” But all of this is contained by the rhythmic and melodic immediacy of hard bop.

The album was recorded in October 2011, and since then the band has been taking it on the road. At Scullers, Luke Marantz replaced the album’s Jake Sherman on Fender Rhodes, and Michael Thomas joined on alto (Edward Perez is the band’s bassist, and Lee Fish the drummer). If anything the music had a bit more edge and drive, the solos venturing further afield (the band played only six songs in their 90-minute set). But the music still hewed to that focused narrative arc. Palmer introduced three of the tunes with extended a cappella trumpet, which might have been too much of a good thing, but you couldn’t fault the shapeliness of his lines, the dramatic contrasts of tone and texture. The solos by Thomas and Duncan often began as slow simmers that came to a full boil. Marantz helped amp the tension both rhythmically and harmonically, countering the solo lines with odd staccato accents and the rising tension of unstable chords.

Colleen Palmer (Jason’s wife), who is not on the album, sang three songs and wisely avoided mimicking Riperton’s pyrotechnics or tone. Instead, she deployed her formidable technique and musical-theater finesse and clarity. The highlight of the evening might have been the closer, “Loving You,” Riperton’s biggest hit. Here Palmer chopped up the tune’s melodic parts into overlapping vocal and instrumental counterpoint. And here he also provided strong rhythmic contrasts as well, his complex steeplechase of mixed meters on the theme (different in every bar) released into a flow of Duncan playing solo over 4/4 swing before returning to the head.  It was a satisfying coda for an evening that showed yet again how pop (even “modern” pop) can serve as nourishment for new jazz.

For this and other articles on jazz, check out The Arts Fuse.